I forget what I am doing today. I think it’s lava tube caving, then dinner with Sheila. Yep! I was right. Already the days are blurring together. It’s kinda nice. I am at least separating all of the notes in my phone by day so it is easier to keep track of when I finally get around to posting this stuff.

Waking up at 9AM is probably the latest I’ve had to get up since I’ve been here. It’s also probably the only day I can do that. Last night I was trying to sleep but people wouldn’t stop talking. This one girl decided to wash a shirt in the sink. Why can’t you do that in the shower like everyone else? I needed to brush my teeth and didn’t really want to have to go across the hall to the bathroom.

Fermented skate with butter/fat sauce may happen tomorrow as part of Christmas tradition. (It didn’t end up happening, but more on what happens around Christmas time in another post).

Shop at Bonardes for groceriese, 1011 is the most expensive grocery store in Iceland. It is also one of the more convenient ones, however, because they are everywhere. If you really want to save some money, go to Bonardes. 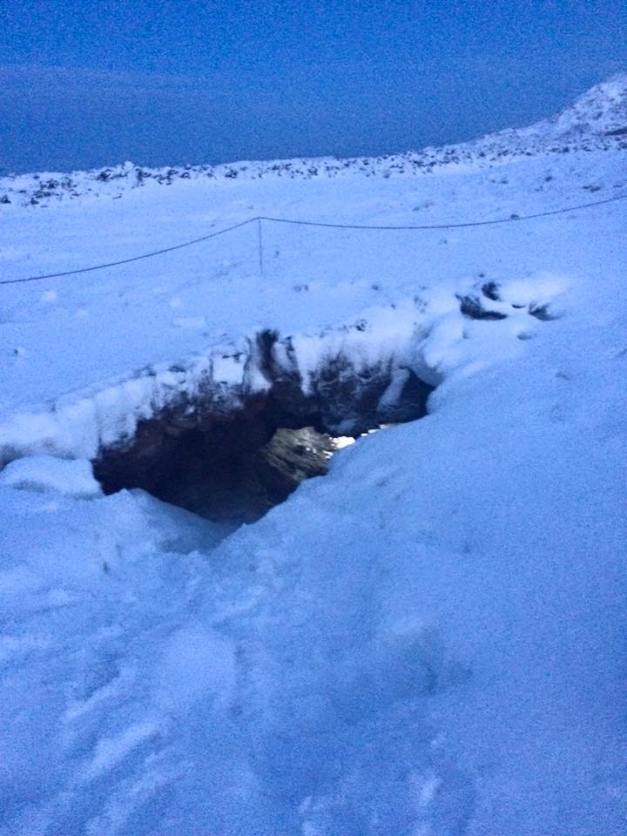 Into the mouth of the cave I go!

The lava caves were really cool! Even little me had to duck and crawl a few times, though not nearly as often as some of the taller group members. There were some really cool red colors around, and you can see where the lava came through. 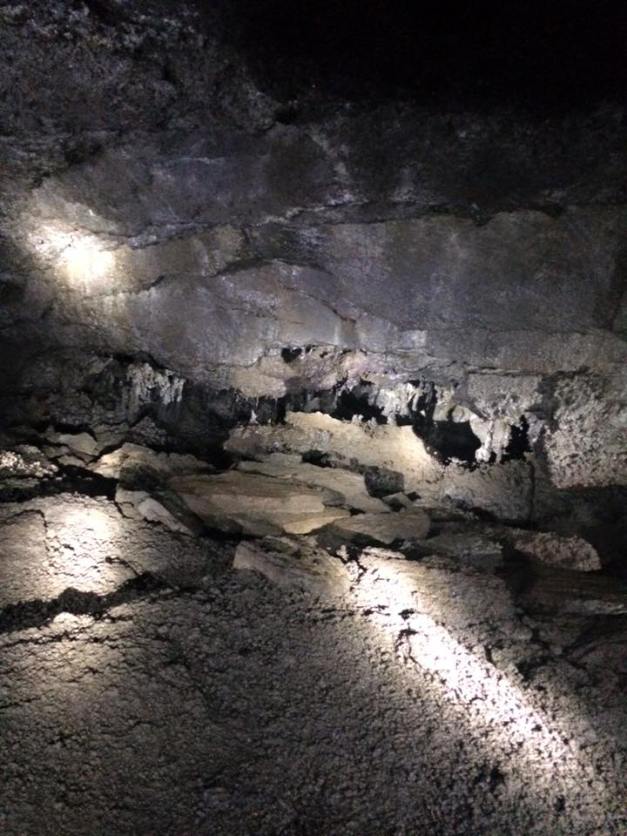 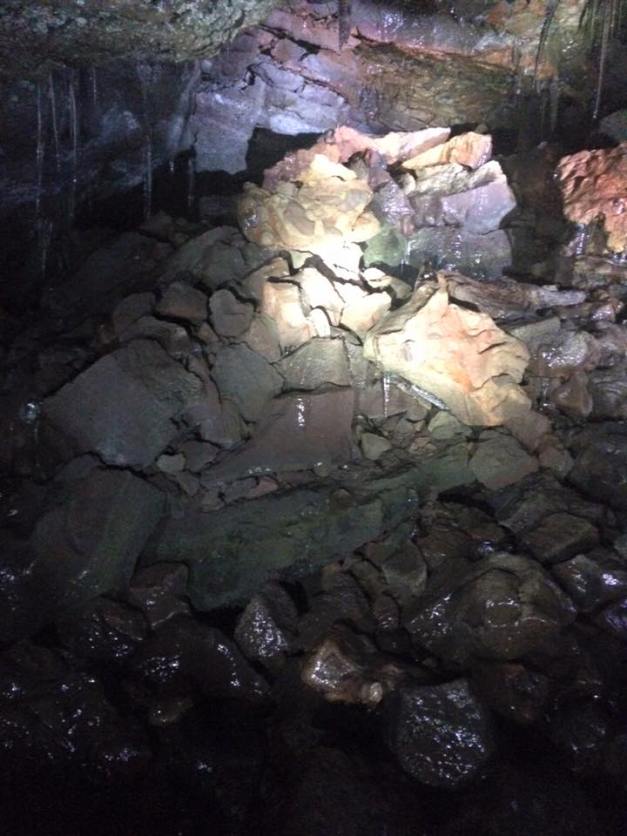 That shiny stuff is pure ice covered everything. Use crampons and care when walking. 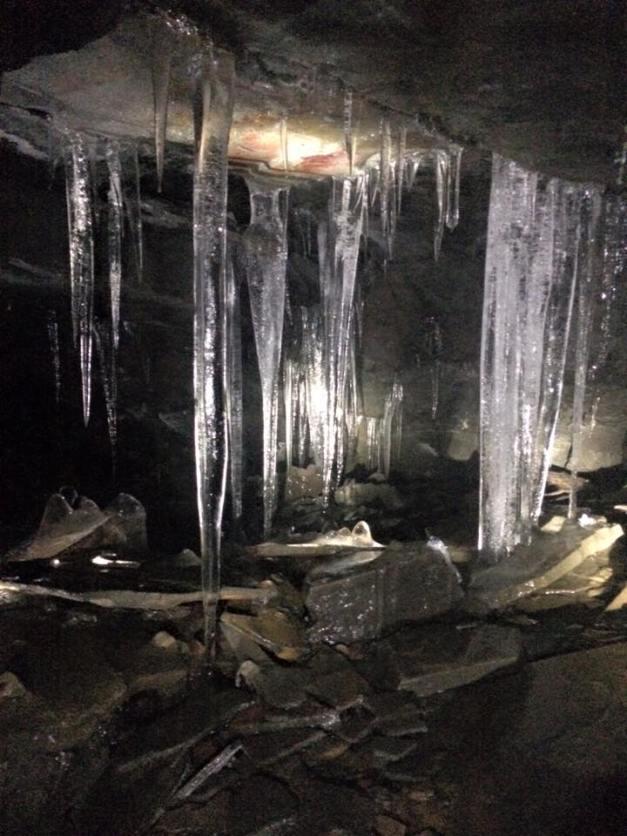 Icicles are a lot less ominous when dancing around in the Nutcracker.

There is also this little guy. 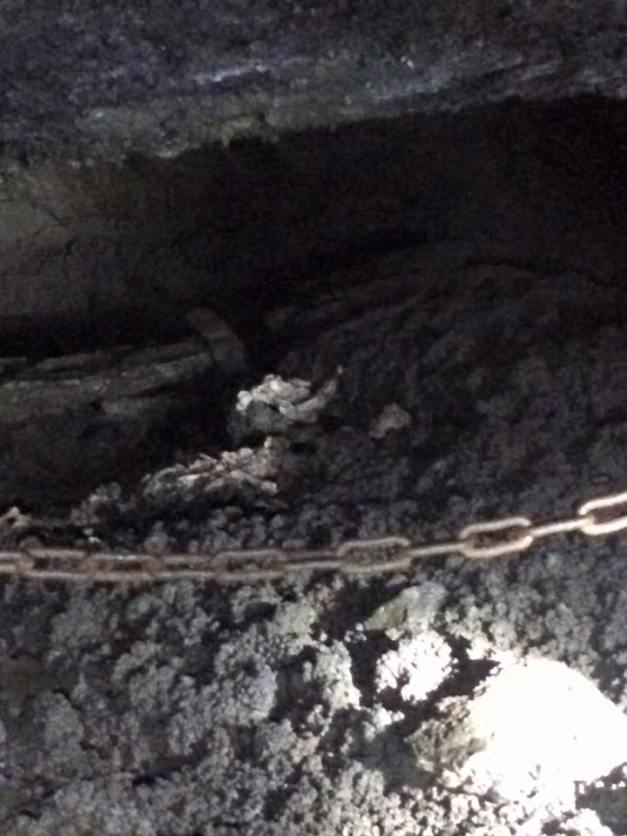 The white stuff you see there is the bone remains of a lamb that got trapped inside the cave and probably starved to death. It is kind of a mystery as to how it got trapped so far inside the cave because these animals don’t really venture out much. We turned off all of the lights to experience true darkness where you cannot even see your hand in front of your face, even when it hits you. How the lamb made it this far into the cave without bumping into something and dying of a concussion beats the hell out of me, but maybe I am just way more clumsy than it was.

In addition to the lava cave, we saw the racks where the dried fish fillets are actually hung up to dry. They do not look like this when they are actually ready to eat though! 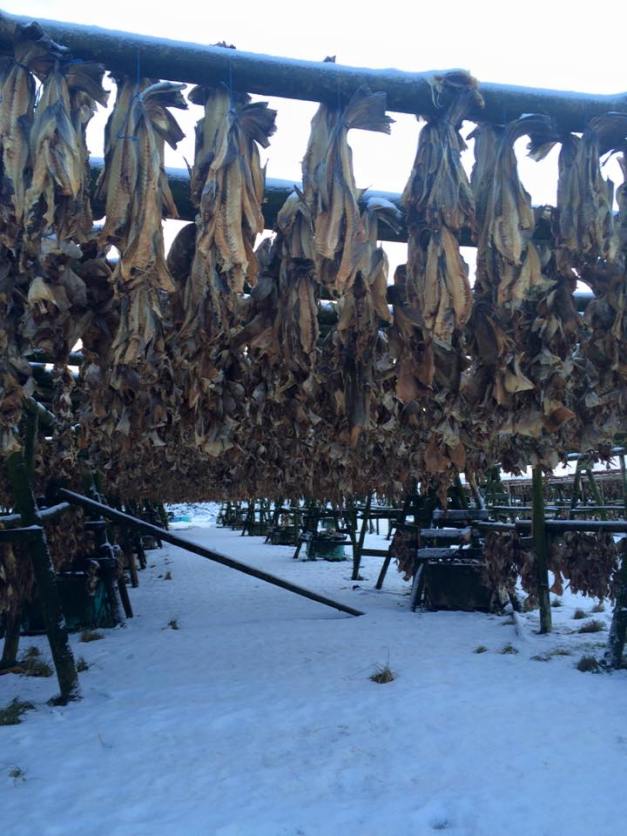 I asked our tour guide about the horse meat and they do indeed eat it, but more for sentimental historical reasons, as they’ve had to eat their horses for centuries before. There is an authentic Viking tavern where everyone dresses in traditional clothing and serves traditional food like the year 1000, including pickled lamb testicles. Yum? I will find out the next time I am in Iceland.

I got back to the hostel and had originally “scheduled” some Reykjavik exploration before showering and going to dinner with Sheila but I was tired enough and in enough pain from yesterday’s horse riding day to be able to take a nap. So I did that then showered. The water was warm and the showers were spacious, although you had to hold the shower head yourself and set it down on what makes it look like an old fashioned telephone. It took everything to not sing Adele’s Hello, but no not in public, not like this. I forgot a towel. Eh I was the only one in there so I used the hand blow dryer to dry myself off even someone walked in. It’s a hostel. Weird things are supposed to happen. No one did though. Not this time and not future times. Darn? That would have been funny, at least for me. Anyway…

Food time at Kopar, a nice restaurant by the water. This is the restaurant you can get a compensated meal at if you don’t like your Northern Lights experience. That’s not why we were there though. Before the appetizers, we got bread with poppy seed garlic butter. The butter was placed on a rock. Why? Sheila had smoked lamb for her appetizer and I had langoustine with lobster and asparagus. We both tried each other’s. She liked the lamb more than I did. I am not sure why I didn’t like it, but oh well. The taste was fine but the texture was not as favorable to me as other things. She had catch of the day and I had horse steak with sweet potato and other vegetables. 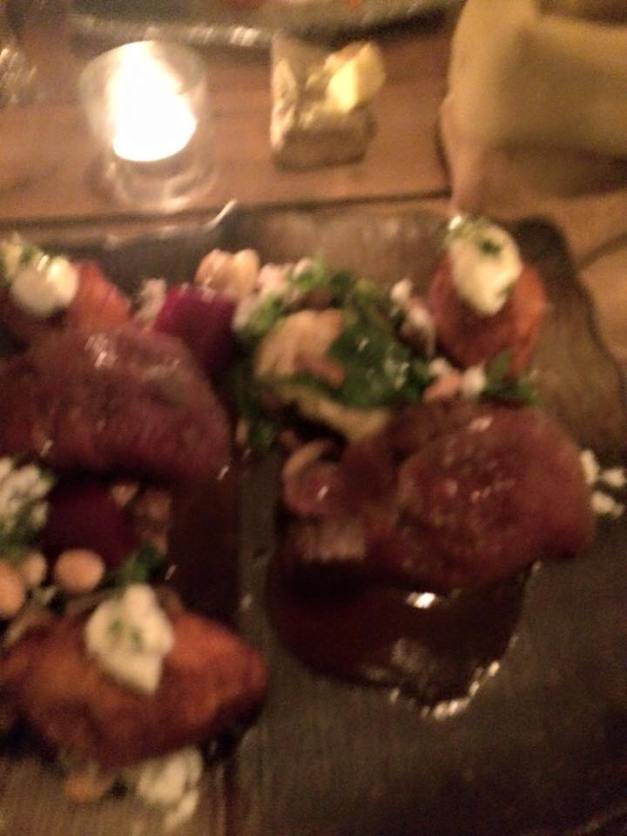 It’s blurry because I was trying to stealthily take a picture at a fancy restaurant with no one looking. It didn’t work. This is the horse and sweet potatoes though!

Dinner was funny because we both recently switched from being vegetarians. We switched for the same reason (mainly not wanting to be limited from any cultural experience while traveling), but here we are eating lamb and horse, etc. We both took some time to start at the food and have some more wine to get over ourselves haha. It worked. It was worth it. I am sorry, but the horse was actually really good. It was tender but not rare, and the sauce served with it was delicious too. I want to know how to make it. The sauce, not the horse, though I would eat that again too if given the option.

Conversation with an Icelander about the sauce:

“What is the sauce that comes with horse?”

“Was it the brown sauce?”

“We call it brown sauce.”

Needless to say, I didn’t get anything close to a recipe.

Tomorrow I am going snorkeling at Silfra on the Mid Atlantic Ridge. It is the only place in the world you can do that between tectonic plates. The water is 1-2 degrees Celsius year round, so a dry suit is required. Even if they aren’t completely cold proof, it’s worth it. Everything here is worth it.