I was supposed to go hiking on a volcano, but it was canceled due to weather conditions. Yes, it is not the best weather today, that is for sure! Instead, today is the day I explore some traditional food I haven’t tried yet. Fermented shark for lunch, and puffin and whale for dinner. Yes, fermented shark. I will make a separate post with more information about that, but keep reading this post for my experience with it. There have been many awful reactions from others who have tried it…which means all the more reason for me to do it! And as I share my (mostly) unfiltered experiences here, well… yeah. Often times I don’t know what I am eating. I will ask after I have already started. Sometimes ignorance is bliss, but you don’t get that luxury here haha

Well it is noon and I am still in bed. I have had consistent early to late days and could clearly have used the rest. Also, I may or may not have been up playing bingo and Tiny Tower on my phone until 2:30AM. I am a sucker for stupid iPhone games haha, but I only allow myself to have 1-2 on my phone at any given time. It’s good to have a balance.

I now just need the motivation to get out of my blanket burrito so I can go eat breakfast/lunch? Okay I have to pee, that’s the motivation I need. AHHHHHH

Okay I am sitting Cafe Loki, across from the Halgrimskirkja church, waiting to order the fermented shark. They serve it as four cheese-cube-sized pieces along with a shot of brennivin (unsweetened schnapps). The sole purpose of the brennivin is to chase down the taste of the shark. I honestly disliked the brennivin more than the shark. In addition to the shark and shot, I got a bagel with smoked trout and cottage cheese…that was my savior with this whole experience.

Okay if I can get through this, I can get through anything. I feel like I’d rather eat fried tarantula, but they don’t have those here. Of course I say that now, but when I face that spider, I can guarantee I will have some inner battles to overcome. I am so hungry right now though so maybe this is a good way to test out the “I am so hungry I could eat anything!” theory. Ooooh someone else is having the shark, so I will watch them eat it and hopefully they get to it before I get mine so I’m not staring at my food like I did with the horse.

The guy tried it first and kept a straight face. Ok… The woman tried it and said it’s like a stinky sock. Oh great. They mentioned an aftertaste as well, which I have read about. There is also apparently a strong ammonia smell, but my nose doesn’t really work so I get to escape that part.

Okay that wasn’t so bad. Well 1/4 pieces gone. It’s kinda chewy but didn’t really notice anything awful until the aftertaste, and even that wasn’t nearly as bad as I thought it was going to be. I had a harder time with the brennivin. These shots are not the regular sized shots, or it seems bigger because it is just that awful haha. I am not the biggest fan of shots, but cultural experience wins out again.

I have three more pieces to get through, and one of the pieces is half the size of the others. Then I will throw the shot back. I am chasing everything down with my smoked trout/cottage cheese bagel sandwich. That second piece though…I got that aftertaste. Just a hint, but it was definitely there. Two down, 1.5 to go. Do I eat the smaller one or the larger one last? Go big or go home. I’ll close out with the larger one. Oh good God, I found the other half of that smaller piece, and it was the worst of all! It tasted like a two week old, used, wet hiking sock that has been stuffed inside a hiking shoe relishing in its own filth for who knows how long. The taste did not wait for me to swallow it down. There was a small thought after the first piece that it wasn’t so bad, and maybe I’d order it again. No. I take that back. But it’s done now. Well, the shark is. Now I must finish the bagel and the alcohol. As the brennivin goes down, I can feel it burning through my soul. For desert, rye bread icecream! That one was really good! 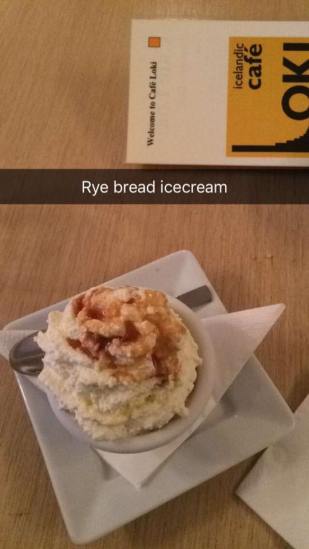 I’m walking the..uhh..scenic route back to my hostel. No I am not lost! David was working the bar again so I went to talk to him and ordered a bee to wash away the memories of my shark experience. I kept having flashbacks on my way back to the hostel and had to fight the urges to throw up a little. I told him to surprise me with whatever beer he wants to serve. We talked books and Lord of the Rings and Game of Thrones. His Swiss coworker joined in and then a Russian cook and French bartender. We all were discussing the French bartender’s drink experiment. I ended up having a drink with all of the workers, who were of course still working. There was rum and blueberries involved, but the Russian wanted more blueberry flavor so he added blueberry liquor. I don’t even work here but it’s amazing what happens by a simple conversation with one person.

I went back to the room to gather my things for dinner and a new person arrived so we talked a bit, especially about the food, and now we are going to dinner together. Why not? I told him I tried the shark today and his response was, “Really? You look to happy right now to have done that.” “Yes, well I just had a large beer as well.”

As planned, smoked puffin and whale steak was for dinner this evening. The puffin was really good! The smoky flavor and semi tender/semi firm texture was delightful, and it was topped with a blueberry sauce. What is it with today and blueberries? Oh yeah, they’re also delicious. The whale steak just tasted like what I remember cow steak to taste like. It was perfectly cooked and I forgot what I was really eating for a minute or two. I was also starving so it didn’t stay on my plate for very long.

I’m so hungry, I could eat a whale!

We then went to the Lebowski Bar for a beer then went back to the hostel. I have an early day tomorrow so time to play bingo, I mean sleep.

I’m so hungry, I could eat a whale!