Amtrak Around the Country: Day 5-Touristing in Chicago and My New Friend!

I woke up at five in the morning and checked Snapchat for the Minnesota filter because I missed Idaho and didn’t want to miss another state. Then I started thinking. The Pandora’s box inside my head had been opened before my train trip and I thought I was done with it. I was wrong, and then I realized there were a few tears streaming down my face. I was upset partially because of what I was thinking about and partially because I was done with it. Maybe I will never really be done with that, but maybe that’s okay.

Sigh…John Cusack’s doppelganger will not stop talking. It is kind of entertaining because it is obvious he has no idea what he is talking about, but at the same time…I just want to enjoy the landscape of the Midwest in peace.

Phone camera tip: Put the phone right up to the glass windows to avoid glares and reflections.

I learned that after taking this photo.

At lunch, I overheard Joyce say “For lunch we have the barbecued pork shank. That is our salad dressing-oops that is our lunch special.” Someone didn’t get enough sleep last night! 🙂 The people at my table for lunch aren’t talkative at all. This is the first time that has happened so far. I guess I shall eat in silence? Ah finally they speak words! The girl next to me is a fourth year PhD student in clinical psychology, and did a lot of studying abroad in college. We discussed the uselessness of the GRE.

Can you tell I am excited? haha

We have arrived in Chicago! I couldn’t get back to the diner car to meet Joyce before us going to Giordano’s because there were too many people. By the time I got a hold of her she had already made alternative plans, so I went by myself which is also fine. Oh my god this is delicious! Chicago style deep-dish pizza is…well…I can’t even describe how much I love this stuff!

I then went to the Sears Tower, which is apparently now called the Willis Tower. Regardless, I went up to the Skydeck and stood on the glass platform that extends four feet away from the tower so you can look straight down and see everything below. It was interesting and definitely not for the faint of heart. All I could think was “Well this is cool but what if I fall?” The tower is twice as high as the bridge I am bunjy jumping off of in South Africa. Cool…that should be nothing. HAAAAAAAA!!!

Not for the faint of heart!

Ah sh!t, I have 4 percent battery on my phone and I have wait almost three hours until I can get on the train and charge it. None of the outlets in the station are working, of course. Wow I am dumb…I have had my portable charger this entire time. Never mind, it doesn’t work. Yay there is one that does work! There is a girl here named Roxie and so we started talking. She is 28 and in culinary school. YAY FOOOOD!!!! She is here with two not-so-nice people going across the country. I know how it feels to be left out and have “friends” be rude to you on a trip, so I sympathize. We are sitting together on the train, she is awesome and I can already tell we will be staying in contact even after we part ways on this trip! Apparently people on her last train ride got kicked off the train for drinking too much. She took the California Zephyr to Chicago and I took the Empire Builder, so it was cool to exchange stories of those experiences. 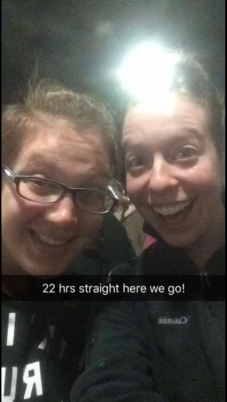 Alrighty Train #4! Lakeshore Limited from Chicago to NYC!! My second home. Oy it’s a good thing this train leg is only a day. Roxie is awesome, but the seats don’t recline as much and the bathroom is absolutely horrendous. At least I escaped this part of traveling for as long as I did. Someone sent me a bathroom sanitation kit to try out and write a review on, which I will do shortly. I had been trying to postpone using it since I only have one and I usually just suck it up and go anyway. But eh what the heck, I will use it now, as there was urine everywhere in this stall and vomit in the other one. After this, I shall hold it until my arrival in New York. 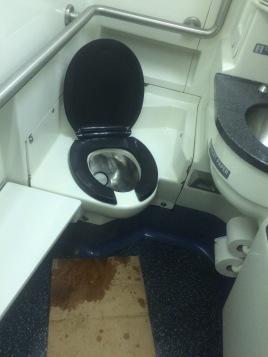 Roxie and I keep talking and goofing off, and this lady keeps looking at us. Sorry we are having fun, but sleep will happen eventually. I borrowed/temporarily stole Roxie’s blanket to sleep with. Everyone is snoring haha, no sleep for Alyx because earbuds and ear plugs don’t like staying in my ears.