South Africa: On My Waaayyy…if I catch my flight…

The last day in the country for a little while and having to say goodbye to Michael was hard. I knew it would be. What made it more interesting was that I was under the impression that my flight takes of at 10pm so we didn’t have to leave until 7:30pm. However, I went to his room to check my phone and the boarding pass popped up saying 8:05. Wtf does that mean? OH SHIT THE FLIGHT LEAVES AT 8! It is currently 6:30…I grab my bag of stuff I was planning on wearing to the airport and everything else and we hop into his car. Sometimes I’m a bit of a stress ball and I started frantically going through shit “trying to organize,” rather than actually putting things on and in my pockets. I get my crap together, breathe..sort of, change in the car (which brings me back to the good ole ballet-class-right-after-school-days), stuff as much as I can into my pockets and have to hold everything else until I can calmly reorganize.

So much for learning how to use my new phone. I got a blu unlocked GSM network phone so I can use a local SIM card and prepaid plan there. I’ll eliminate the box the phone came in when I can, but for now, let’s get checked in and through security. I go into the terminal but the check in area is clear…of pretty much everyone. Shit! I go to the kiosk and put in my name, then realize I’m checking into Alaska airlines. NOOOOOOO cancel!! Where is British airways? OMG I’m so screwed! No calm down Alyx. Breathe and think. Go try another kiosk. The right one this time. Duh. The British Airways option is there but grayed out so I can’t actually click on it. Fabulous. At least I checked in online through the app, and I’m just going to have to hope that it’s fine…as I don’t really seem to have any other choice.

I see the sign for all gates (and haven’t even looked at which gate my flight takes from)…way to go Alyx. Idiot. Anyway, I go up the stairs and into the security line. This is neither the longest nor shortest security line I’ve been in, but given my current anxiety, even one person ahead of me would worry me. I don’t even know if I’m in the right line since idk what gate. In retrospect the entrance said “security for all gates” haha. And then on the back wall (once I can move forward in line a little bit I just see writing on the wall for Alaska and southwest. Is British airways even here? I’m freaking out. A couple people felt bad for me and let me get ahead of them while I’m contemplating whether I should just leave the line and go who knows where.

I keep it together enough to stay in line (good idea) and then shout out to the TSA girl asking if British airways is here. She nodded her head with a facial expression that says “Oh great, this girl over here.” I get to the boarding pass scanner (the pass on my phone counts phew), and ask her which gate I go to. She says “I don’t know, I think it’s 18…which will be all the way to your right.” All the way…oh man…ok it’s ok I’m ok.

They have us take out the quart size bag of liquids and liquids have to be under 3.4 oz, I also put a thing of liquid foundation in there outside of the quart sized bag. Let’s just see what happens since I think my toothpaste is bigger than that. If they throw that stuff away it’s okay as that stuff is easily replaceable. They didn’t. Everything went through and is fine….including the liquid foundation that wasn’t even in the ziplock…nice job security. Oh well less time for that and more time to start running to airline with the following in my hands: my phone box, money belt, sunglasses, passport, and current phone. I drop my sunglasses…of course. I was on and off running due to being out of breath from the anxiety. Why do I do this? I should know better. I know it happens to the best of us but come on. Oh well, I made it and they’re nowhere near being done with boarding. Phew I can calm down now.

At the gate, they need to check my passport here since I checked in online, but they do it and it’s all good. My seat is in the very back, middle. Which means I have to be that person to kick the guy out of his seat so I can pee who knows how many times since I drink lots of water. Sorry sir ahead of time.

I start watching Hunger Games Mockingjay Part 2, but I’m too tired so I watch the beginning, then fall asleep for a bit. I wake up right as they’re handing dinner out to my row. Well if that isn’t perfect timing, I don’t know what is. The only thing they had left is chicken. That’s fine chicken is fine I like chicken. I’m not quite sure what the other stuff was cuz it’s not mashed potatoes and it’s not grits. It did kind of have the taste and consistency of some sort of corn based hot cereal. There was a lot of sauce/spinach on the chicken but it wasn’t bad either. It’s reminiscent of chicken Parmesan without the cheese. Michael’s is better. The salad was made up of a large piece of lettuce topped with four tomatoes and five pesto covered mozzarella cheese balls. The meal also came with two crackers, “cheddar cheese,” and bread/butter. For dessert there was a slice of strawberry cheesecake which was actually delicious!

Now it’s time to sleep through the majority of the trip. If I sleep as much as I can up until I arrive in Cape Town, I’ll be rested enough to stay awake throughout the day and get used to the time change sooner!

I wake up with about two hours of flight time left…just as they’re serving breakfast haha. Yesss. I get the full English breakfast which was….uhh…well I’ve had better meals. There were eggs, mushrooms, bacon(?), and a sausage in the main plate. I was too scared to eat the sausage. It was grey and gross looking. I ate part of the blue berry muffin, a spoon of the blueberry yogurt so it could feel acknowledged.

After breakfast, I started putting together the phone. It’s Android operating system, so hopefully I can figure it out soon because I am so used to Apple. I actually read the “manual,” but there was nothing else to do and I figured out everything the manual explained before reading it anyway. Oh well. And yet another thing to shove into my pockets but I can rearrange at the airport on my layover since I can’t access my backpack right now. It’s too big to fit under the seat so it’s in the overhead bin across the row. I didn’t check my luggage (not that I would even be able to having arrived when I did), but at least that makes the process super easy.
While waiting for the bathroom to free up, I over hear convos about the food:

Girl attendant-idk i think it’s some kind of chicken

Guy-what are they selling it as?

Girl-no idea
We are about to descend or have started descending already. Twenty two more minutes of flight time. I think the total flight time for this leg is 10 hours? Of course with the time change it messes that up. It’s 5:48am in San Jose and 1:48 pm in London. I feel tired but am awake, sooo I’d say my body feel like it’s about 10am. I’m getting closer to local time. Yay! South Africa is another hour ahead of London, but I can use the layover to work on time change acclimation.

Being in the back means you can hear all conversations between flight attendants. They’re talking about how not smooth the landing is going to be, and then sharing stories of sick passengers from previous flights. Haha why? The landing was fine, by the way.

I’m in the very back and so of course I’ll be the last one off the plane. Oh well. I shall just sit here and wait. I have time. It’s 2:30 pm now and my next flight takes off 7 hours from now.

I am taking little train thingy (also known as a tram/subway/shuttle) back to arrivals so I can take a tram/bus to the new terminal. “It will take twelve minutes for your journey.” Haha journey to a different terminal. I’d say it’s more of an excursion than a journey?

London security is more cautious than USA. My bag needs further screening most likely because I left the foundation in there. Oops. This sucks though because it’s in the front pocket, but they might still open everything. I stuffed the stuff from my pockets into the top of the big pocket. I guess it’s fine that I have time since I’ll need it to repack…again hahaha

I didn’t need to. They could tell which pocket the issue was, and even put all my liquids together for me without the bag zipped up and voila! The big pocket didn’t need to be opened at all.

In the passport check line, some girl had no special awareness as she kept bumping into things, more so than myself. And she is now sitting next to me, bumping into the trash can and then chair hahaha. I thought I was clumsy.

I am now on the plane heading to Cape Town! I watch the entire Hunger Games film this time. Not bad. For dinner, chicken with a side of bread and pasta salad.

Now this meal was actually enjoyable. Time for more sleep until breakfast! Breakfast was more on the standards of typical airline food and I didn’t eat much of it. I had some of the eggs, the mushrooms, the juice, and the yogurt. The yogurt was good.

After going through customs, I picked up my SIM card, which I preordered through B4iGo online while waiting at the London Heathrow Airport. I am using Vodacom which is similar to Vodaphone (what I used in Australia).

The cab ride to the hostel is insanely beautiful with Table Mountain staring right at you almost the entire way. I am going to enjoy this country! 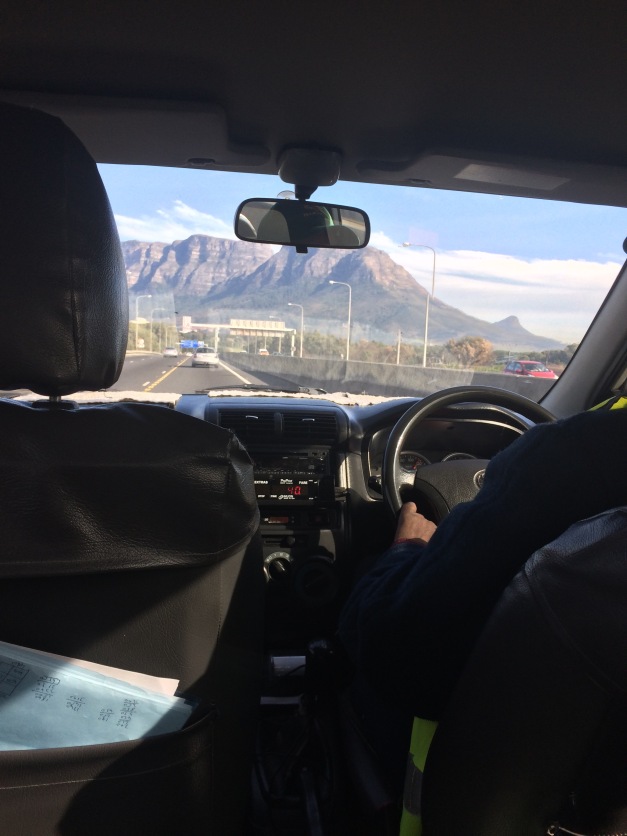 6 comments on “South Africa: On My Waaayyy…if I catch my flight…”