Amtrak Around the Country: An Interesting Start

Well, the time has come! The “mental box” has already been opened, and the majority of the crap in the mental box has already been dealt with so this trip could actually be focused more on the landscapes of the country and meeting people instead of heaps of introspection. I finished my last session, and now await Daphne to pick me up and take me to the train station, since she’s the only one I have really discussed the “box” with, and I felt it fitting that she be the one to send me off. We get to the train station, say our goodbyes, I go to the platform, and then I wait. There is a train here but I am not sure if I am supposed to get on it or not so I shall wait here until someone who actually knows what they’re doing shows up.

It was the correct train all along…oops

I haven’t even boarded the train and I already met someone! Her name is Alejandra, she is 26, and has already had such a crazy difficult and stressful life, but has a good head on her shoulders at least now. She is kind of inspiring and resonates with me because even though we have different upbringings and backgrounds, we both seem to have dealt with everything mostly ourselves, and have been quite successful with that method…at least I think so. Also, she likes to jump out and scare people like I do with one of my roommates! haha I love you Chelsea. 😀

She has a daughter who had a twin, but Alejandra lost that one before birth. There is a video of the daughter talking to someone so Ali asked who she was talking to and this blue-ish white light skittered across the wall which happens twice, and then the girls eyes appear white as if the flash was on…but it wasn’t. I don’t know if or what I believe about that sort of stuff, but I do know that Ali has no idea how to edit a video.

I got off at Emeryville and went into the train station. The area seems kinda dead…but that may also be that it is 8:30PM. I am here with plenty of time before my 10:04PM departure. WOOHOO!

Early….yes…very. I show up and the train is already delayed for 2 hours. The lady said it’s delayed until 12:30AM and keeps getting later and later. Well what the hell is that supposed to mean? And why is it delayed? Oh well I shall eat my snacks. Luckily my aunt said she’d pick me up from Seattle no matter what time I get there…that is so nice! It’s now estimated to arrive at this station at 1AM and still getting later. No one has said the reasoning yet.

It’s only 9:36 and I am already getting delirious. I want food but I don’t want to open my purse and face the explosion of all the stuff I compressed into it, but I’d have to open it to get money for the vending machine. I might as well eat my almonds and cranberries…which are of course also in the purse. Wonderful planning, Alyx. Oooooh the vending machine has animal cookies! Yessss that is so happening! 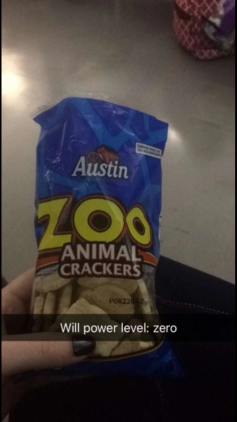 Now delayed until 2AM. We finally have information: The train is stuck in Paso Robles because it hit a vehicle and has been completely stopped for the past 3.5 hours. Jeez! Apparently this happens a lot? People! Learn the rules of the road and don’t stop your car on a train track. It will inconvenience many people, including you if you even make it out alive. Just don’t do it..

Okay it’s cold so I put on my longsleeve tee and thermal leggings underneath what I was already wearing. Yay more room in my purse for…well..just more room. Ah! More foom for snacks that I am trying to resist the temptation of buying! But there are these cappuchino chocolate chip cookies that are calling my name. I should brush my teeth, but then I won’t know what they taste like…ugh. 11PM decisions. I bought them and what a disappointment. They just tasted like knock off Chips Ahoy with just a faint hint of cinnamon. I should have brushed my teeth beforehand.

It is now 3AM, people are trying to sleep on the cold tile floor, and in the seats that have stationary arm rests. I am small and can curl up in a ball at least but that’s of course not comfortable either, so I am going to do something else. I  am Snapchatting and observing other people trying to sleep, someone is knitting, a group of Asians are talking loudly, and a couple people constantly go up to the desk for updates. I’m over it…I am just sitting here semi impatiently (this disrupts food consumption schedules) for the train to arrive, assuming it will at somepoint, hopefully today since it was supposed to be here yesterday bla bla bla. The Emeryville station bathroom is really nice! The San Jose station and the Coast Starlight bathroom were not as nice. I slept some on the train but someone was next to me so I couldn’t use the seat next to me as a make shift bed. Better luck next time! 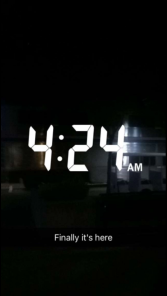 Tomorrow I am going to check out the observation car for better views of the landscape!