Amtrak Around the Country: Day 7-That time when I almost missed my train out of NYC 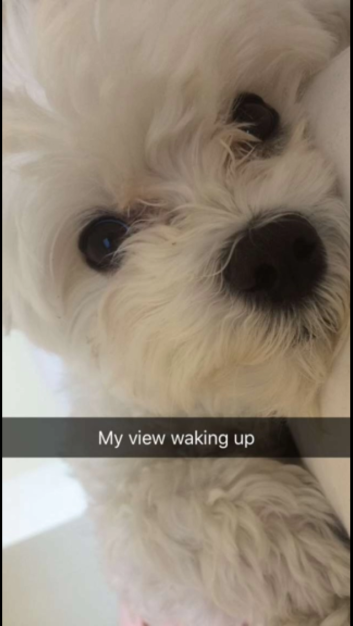 Goooooood morning NYC! I woke up around 9ish, and Daisy (Inga’s doggy) kept giving me kisses. Seriously, doesn’t your tongue get tired? But she is so cute!!! I could wake up every morning to this! I went downstairs to the Equinox gym, showered and did some laundry in the sink haha. I am now drying the clothes for a little bit in her dryer upstairs before heading uptown to visit another friend at work for two minutes while she goes on a “bathroom break,” and then to make a surprise visit at Marymount!

I took a cab up to Ashley’s work because I was lazy haha. She works at a preschool and the secretary said “Welcome back!” I think the secretary thought I was a parent, or maybe a babysitter, waiting to pick their kid up. Nope. I can hear Ashley’s voice leading the class and am waiting to see her facial expression when she sees me. She came out and hugged me, and we talked longer than we expected we would have, so that’s nice! While we were talking, pizza arrived…oh dear. Well yay for free lunch! I had been talking to Michael all morning about how I have been craving a salad….buuuuuut….free is good. One slice won’t kill me. I have will power…I think…maybe…possibly…we shall see…oh good grief just enjoy life!

I went over to Marymount and saw Kylie! I ran into one of the art professors I was going to surprise! We headed up to the 7th floor where the psychology department is and I was able to talk to my old counselor, some other students, and the professor with whom I did research and assisted teaching!

I talked to Dr. Solomon for longer than I should have..but so worth it! There is so much traffic and construction today. I hope I can catch my next train. If not, it’s not like NYC is the worst place I could be stuck in…but still…next stop, New Orleans! I got on the train with 9 minutes to spare. Normally I don’t wear anything with heels when I travel…and there is a good reason for that. My feet hurt from running but that is okay, I don’t have to be on them for a while. Now I shall sit and enjoy the scenery of the East Coast down through the South.

I suppose I should probably book my hostel for tonight now that I am on the train. They still have space, cool! There is a person talking loudly on the phone with the speaker on, and she is going all the way down to New Orleans as well. Yay…ooo and a misbehaving toddler. She is cute though!

This train is going really fast. Consistently over 100, between 101-107. Should I be worried? I checked, and apparently a lot of them go even faster, but just none of the ones I have been on so far. Different routes have different speed restrictions due to curvy tracks and who knows what else. They also weren’t nearly as shaky or turbulent, which is the reason I noticed that we were going faster in the first place.

It’s feeding time!! Roasted chicken and vegetables. Salty. So salty. It’s my fault for spilling the salt on the veggies but still. That is what water is for haha! The chicken falls apart easily so it’s kind of hard to eat. Today, I am sitting with a 26 year old flamboyantly gay guy who has a hilarious personality and laugh. We were looking on Grindr to see if anyone else on the train was on Grindr and wanted to hook up with him. No luck. Sorry dude.

I forgot to take a picture of the chicken meal, but it wasn’t anything special. It was a bit dry, and I think I will stick to the other dish options for future meals.

“One of my friends goes to Marymount! Well he’s not really my friend, he just sold weed.”-guy sitting next to me on the train.

I lost a sock. I had it this morning. I washed it. Now it’s gone. I actually really liked that sock. Oh well, sadness over after a brief mourning period.

The gay guy came over to my seat, tapped me on the shoulder and said “Hey, the guy next to you is cuuuuuute!” Yes…I am aware haha. I am interested in someone back in San Jose though soooo….no to anyone else.

West Coast-Best Coast, East Coast-Feast Coast. The trains in the west are much better quality from what I have experienced so far, and I have been eating so much on the east coast. So much. I feel like a balloon.

**Fun Fact: One night in a sleeper cabin is $100 MORE than my ENTIRE trip around the country…including food costs. They aren’t even that comfortable from what I heard, so I am definitely glad I decided against them.