Amtrak Around the Country: Day 8-Down in New Orleans

Good morning! Sleeping was on and off, but I got in my snap filters for all the states we passed through this time and I’m still actually quite rested. The guy next to me didn’t sleep, but it was his first time on a train overnight…yeah been there dude. I’m used to it now, so I can! 🙂

There are not nearly as many snap filters down south as there are anywhere else in the country. Things are green here, which is so much different than the brown weeds in the north haha!

The turkey sandwich was disgusting I couldn’t even finish it, so now I’m just waiting for feeding time again. As always.

Obnoxious Baby is gone now, but people still keep talking on the phone. I’ve been on and off sleeping…and texting Michael. 🙂

Oh Snapchat…how you never cease to amuse me.

Dinner time! They ran out of most food options. How?! Not even salad or bread. The lasagna was not fully heated up. There were chunks of ice at the bottom, but I had my chocolate mousse as usual! I sat with a guy from Alabama. Even he called himself the typical southern guy. His definition: Nice, got married young to a girl he knew his whole life through the church. But he’s not for Trump. Good he has a brain! He’s more conservative but feels he will most likely vote for Hilary. Although it’s not like it’s clear where she really stands either haha ohhhh politics. I just travel. You learn a lot more about everything, including politics and religion, that way. Regardless of who he votes for, he is a level headed person who knows the president doesn’t actually have as much power as people think they do. Anyway I digress..He ended up paying for my dinner, if you can even consider that food. Still though, thank you Weston!

The graves apparently must be enclosed and above ground because due to flooding, decomposing bodies were lifted up and floating around…more or less the story.

One hour til New Orleans!!!

Ok I’m here, and met a girl at the train station. We Ubered together.

I got to the hostel, which is really cool, I’ll see it in morning sometime…but it’s literally a mansion they transformed into a hostel. There’s a girl on the bed under me sitting silently on her phone wearing sunglasses…interesting haha. There are also two girls who are clearly besties with their stuff everywhere, and it makes even ME look organized! Baha it’s great. I am tired…but I should go out…but I don’t want to go alone…so I’ll see if I can get someone else to invite me. If not then I shall sleep and truly experience New Orleans when I come back. No…f@ck it Alyx, you will make more friends tonight. The two girls went to the bathroom to get ready and I started talking to the Argentinian sunglasses girl. She came in from New York today and was super tired, but I convinced her to do dinner and one drink. Then the girls came back and we were all talking and they (Nicole and Andrea) invited me to go out with them. Okay Argentina, you get to sleep tonight.

We are going to a crawfish broil at the Three Legged Dog which apparently only happens on Thursday nights…awesome! Drinks are double shots for the price of one. We pre-game with some Cinerator which is like Fireball but it’s ten percent stronger. It wasn’t as bad as I thought it would be! 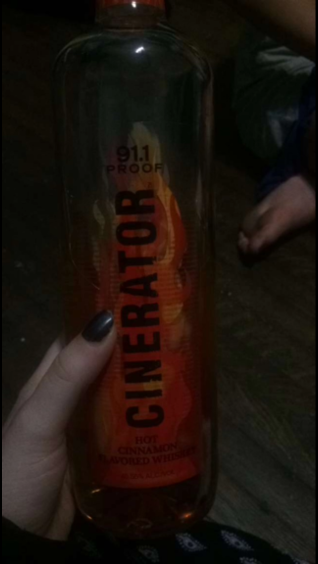 I didn’t have any “going out” shirts or dresses, so Nicole lent me a red strapless top to wear with my jeggings and bootie heels. We took a trolley to Burgundy Street for the Three Legged Dog and walked a couple shady blocks, but we weren’t alone, and we were vigilant so it’s okay. We get there and apparently the crawfish broil is Mon, Wed, Fri and Sat…literally everyday but today. Listen-New Orleans is the city of liars and cheats, and they do not call it that for nothing! The bartenders were hammered and weren’t going to cook us food. They were cool and funny though. We had a drink there (vodka cranberry) doubled, so the guy at least gave us that one. 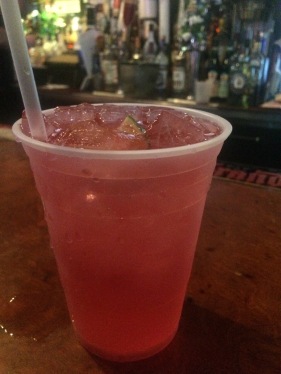 We took our drinks and started  walking around town looking for food. We got pizza and my pizza was called The Bourbon. It had cheese, feta, spinach, chicken and pesto. Omg so freakin’ good! So good. 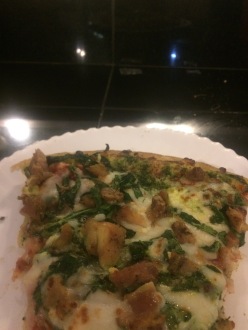 Then we went off to Bourbon for bars and more drinks and what not. Nicole brought a water bottle of the Cinerator. We went to a jazz bar and the performers were just awesome!! Then we went to Pat O’Briens, which was really cool. This is the classy side of New Orleans, and the bathrooms were nice too! I had a rainbow drink which was sour and tasted like a warhead candy, but it was rainbow so I had to get it.

It was good and it came in a souvenirs glass which I of course didn’t take with me due to lack of space buuuut that would have been cool! We have more than enough glasses and cups at my apartment though so it’s okay. The bottle girl also came around handing out complimentary cups of moonshine soaked cherries, but they just tasted like cherries. I still liked them.

Nicole was telling a story about a hotel room she was supposed to stay in but left, and then a few days later apparently the police found a girl’s body chopped up and wrapped in plastic wrap under the bed. Um wtf. She noticed the bed was moved and there were no towels when they went up to see the room, and she decided to not stay there. Good decision. The condition of the room leads me to believe that the girl was under the bed the whole time, certainly when Nicole was in there checking it out. Jeez. I forget where she said this was but it wasn’t Chicago or New Orleans. Anyway, we went to the nice bathroom then back out to Bourbon St. for various bars and some dancing. We were going to go to a strip club but they only took cash for the entry fee and we didn’t have enough. We went up to the second level of a dance club and outside to the balcony. This white guy name Joshua rapped to us and okay yeah he was good. He plays a bajillion instruments as well. That might possibly be a slight exaggeration.

We were trying to get Jell-O shots and thinking of/acting in ridiculous ways to get them, but the efforts were futile. Andrea got us tequila shots instead. With lime but no salt. It was bad but not completely terrible. It was silver not gold, and definitely could have used the salt. Andrea took a beaded necklace from the ground, I swiped a bundle of them from a street pole, and Nicole got a dice one from a pole next to the trash can. Needless to say we all need like five showers…at least. We always seemed to end up in the same area on Bourbon. Bourbon Street really sucks you in, but we made our way out and back to the hostel eventually. Nicole is obsessed with the smell of the plants outside the hostel and they’re apparently oh idk something that starts with an S and something about an orange. Satsuma? Maybe that. I can’t smell very well so it doesn’t make a difference to me.

We found our way to a bar called the Dungeon with a creepy passage way, but no pictures are allowed inside the bar and only cash…so we didn’t go inside. Guys were leaving as we went in and they said “Don’t go in there unless you want to get raped” umm what? We didn’t end up going in.
Okay bed time is now.